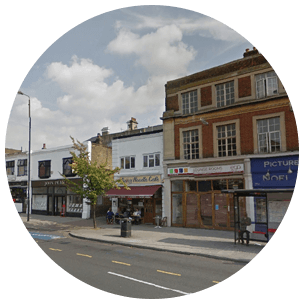 The Diverse & Upcoming Area of Balham

Balham is a district in the south of London and is part of the London Boroughs of Wandsworth and Lambeth. Covering the SW12 and SW11 areas of London, it is surrounded by four separate London commons, including Clapham Common, Wandsworth Common, Tooting Graveney Common and Tooting Bec Common. With its own stop on the Northern tube line as well as an over-ground train station, it is relatively well-connected to the central areas and is within zone 3 of London’s transport districts. Due to its proximity to Clapham, the area is considered to be increasing in popularity and is experiencing something of an economic boom brought on by its neighbouring district. As a result, there are an increasing number of trendy bistros, restaurants and bars which are opening along the main streets and a growing number of middle-class residents. A large Polish population can also be found here, along with smaller pockets of Irish, Portuguese, Somalian, Pakistani and Brazilian communities. Reflecting this diverse population, the area does also have a mix of housing styles with old properties on leafy streets beside newer purpose-built flats in modern council blocks.