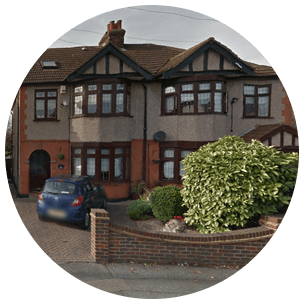 Collier Row lies just north of the A12 Eastern Avenue West, with the area of Mawneys just to its west, Chase Cross to the east and Havering Park situated to the north. The River Rom marks its western boundary from Mawneys with Collier Row Lane running through the centre of the district north to south. The M25 is also close by. Collier Row is named after Colliers, charcoal burners, who lived here in the 15th and 16th centuries. In 1670, it was recorded that Collier Row had 56 houses and until 1925, the area remained a rural village surrounded by open fields of hay and clover. However, once Eastern Avenue opened, giving the area much better access to central London and elsewhere, it started a renewed growth in housing and businesses in the district. The area today is still well-connected in terms of transport and roads although it doesn't have its own tube station. However, Hainult and Newbury Park tube stations are within easy reach with Romford Railway Station also nearby. Places which are within close proximity to Collier Row include Marks Gate, Havering-atte-Bower and Chigwell Row. The RM5 postcode covers Collier Row and has the surrounding postcodes of RM4, RM7, RM1 and RM6.