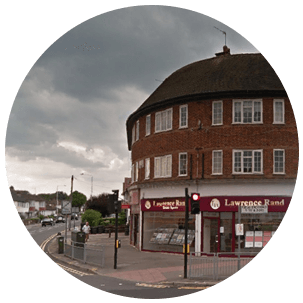 The suburban village of Eastcote lies in the northwest district of HA4 and HA5 and falls under the London Borough of Hillingdon.  Earlier, it was part of the parish of Ruislip along with Westcot and Norwood, all of which then went under the name of Ascot. Eastcote – the name meaning eastern cottages– was later derived from its location in the east of the parish. Eastcote tube station is served by the Metropolitan and Piccadilly lines of the Underground railway service. There is also a number of bus routes that serve the area. Some of the historical architecture in the area includes the Eastcote House, Haydon Hall and HighgroveHouse, however most of these no longer exist on the grounds on which they once stood. Apart from a few villas that were built in the late 1800s on Chapel Hill, most of the community remained a collection of some hundred odd farms and cottages scattered along the River Pinn for most of the 19th century. Post war, the housing shortage in the capital prompted construction of a lot of new homes, most of which are now owned privately. This newly developed area is distinguished from the Eastcote Village, which lies north of Bridle road and is considered the heart of Eastcote. Residents in this area enjoy a peaceful and high standard of living.