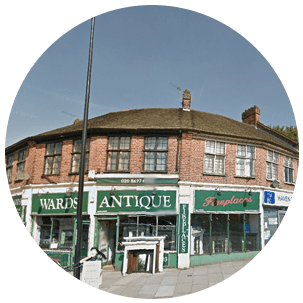 Hither Green is a district in South East London, based in the London Borough Of Lewisham with the postcodes of SE12 and SE13. Located south of Lewisham, it is 6.5 miles of Charing Cross on the Prime Meridian. This area is characterised by the late 19th and 20th century Victorian architecture, the railway runs throughout the area. Hither Green is very peaceful and has a rural feel with a very notable community. It is situated close to Blackheath, Lewisham and Catford, enjoying brilliant transport links to the West End and the City, as well as the DLR (Docklands Light Railway) in New Cross. It remained quite a wooded area through the medieval times between the 18th century and then the first houses were built. Hither Green has a beautiful park called Mountsfield Park and it is also home to Park Fever Hospital, which was formerly known as Hither Green Hospital. All that remains of the tower park is the clock with the large faces. Hither Green is situated close by to Brockley, Catford, Lewisham, Blackheath and Grove Park.