Handy Rubbish › Brief History of Sewers in the Ancient World

Sewers: The Trace of Our History

Sewers have become an integral part of developed society that is often under appreciated. Perhaps looking back on the history of sewers can yield insight. 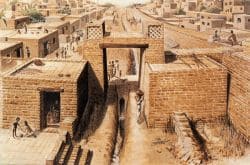 Today sewers are an unsung hero of all that humanity has built. Without sewers dysentery would run rampant, and unfortunate odors would plague the streets. It is hard to imagine a life without some sort of sewage system, and to an extent this has historically been true. Sewers date all the way back to Mesopotamian societies or beyond, but the earliest concrete evidence has been found around the Indus river valley. This archaeological treasure land contains the civilizations named Mohenjo-Daro and Harappa.

These two ancient cities were active around 2500 BC, over four thousand years ago. Evidence has been found within these cities supporting the theory that these civilizations were highly intelligent. One such piece of evidence is the remains of ancient sewer systems. These systems were rather simple ones carved into the earth; nevertheless, they are indication enough that even Indus river valley tribes had the conceptual understanding of waste disposal.

The next major sewer development came hundreds of years later with the Roman Empire. Archaeological evidence shows an understanding of hydraulics in Roman society during 800 BC. The Romans built waterways to contain floodwaters; unfortunately, Roman cities had a habit of throwing waste near these waterways. In turn, when the floodwaters came through, the trenches were filled with odorous wastewater. To remedy this issue the Romans constructed cesspools, predecessors to the modern septic tank. These cesspools allowed muddled water to sit as heavier, dirty particles floated to the bottom. From there cleaner water flowed in the top layer, providing a rough filtration system. This rudimentary system served the Romans and their relatively small populations well, but cesspools would not suffice for medieval European cities.

As European cities spawned, population density skyrocketed. Denser waste lead to more serious problems. Between a quarter and a third of the European population died from cholera, typhoid fever, and the bubonic plague, all of which were spread by uncleanliness. In response the European disposal system, but not the sewers, adapted. This was the period of boiling wastewater and flushing toilets. Yet open sewers were still open.

It was not until the early 19th century that America and Europe began to used a piped sewage system. This cut down on odors as well as disease, but filtration remained to be an underdeveloped process. Before the Clean Air and Water Acts of the 1970’s, much of the filtration in American sewers was a low-grade metal mesh filter, only removing large chunks of waste. Today the public has secondary measures to remove deadly organic pollutants that would damage waterways if not considered. Additionally, sewage systems lightly chlorinate water in a final effort to remove any and all bacteria. It is truly awesome to look back at the transition from simple terraforming of the Indus river valley civilizations to the multistage processes modern cities incorporate.