Our Crayford DA1 waste disposal services are available at great prices and only a phone call away. Every type of clearance work is carried out in no time and it is done to the highest standards. It's what has made us so popular around the local region as well as elsewhere and why we're so highly regarded by many homes and businesses. No job is too big or too small for us. If you want something like rubbish clearance DA1 for your basement or garage done as soon as possible. That's what Handy Rubbish can do for you giving even more that you expect. And we do it at a competitive price in no time.

We make it our aim to supply an affordable waste removal Crayford service with technical expertise and professional performance. One simple way we do that is by having fully trained staff of experts who know what they're doing and who are also polite, considerate when it comes to Crayford rubbish disposal DA1. To talk to one of our skilled staff, make a call on 020 3540 8282 now.

Let Our Professional Waste Removal Specialists Clear Your Space for You

There is so much we can help you with and we go that extra mile to give you that professional service. Let say, for instance, you need Crayford rubbish removal carried out at your business premises or perhaps in your home, then our team of professional employees will arrive at a time and date which suits you, collect everything that needs to be collected, transport it away and recycle as much as we can of what we collect. We are green waste collect company in DA1 area that cares about the environment because we know that’s important for you, too.

We really are the one-stop shop for every type of waste clearance Crayford DA1 service. Another reason to call us is Crayford waste removal which can be hazardous if you're not exactly sure what you're removing. Let us do this work for you and you will have no worries at all. One other reason why we are so popular is because we cut out the need for a skip permit, so you will have the chance to save much money. So call Handy Rubbish now on 020 3540 8282 and tell us what you would like our company to do for you.

There was such a mess after the flood waters receded here in Crayford. We had odd bits here and there, fragments of drenched magazines - you name it. We had so much rubbish to get out of there, but who would handle such a mess? Fortunately, your team of waste disposal experts had no trouble! Thanks to them, we are on our way to having a new basement!

I called several Crayford rubbish removal companies before settling on Handy Rubbish. They have very reasonable rates and a well-trained and professional crew. I would definitely recommend their services.

The wife wanted me to clean up our DA1 property, and we used this waste collection service because they had the best rates for garden waste clearance in the area. They were terrific. Had the job done quickly and without a fuss.

My wife hired Handy Rubbish for assistance with junk clearance at our auto yard in DA1 last month. They took the items we marked almost immediately. Thank you for a great job!

I had to use the rubbish disposal service when my grandma passed. Handy Rubbish in Crayford did an amazing job, and didn't even drain the bank. I know who to call next time I have an excess of junk lying around.

I know I get the best deal on waste disposal when I call Handy Rubbish. They are very affordable for Crayford DA1.

I would never change Handy Rubbish as my regular rubbish collection company. I have been working with them for a long time, and they have never been disappointed me.

Thank you Handy Rubbish for superb rubbish removal services at my hostel in Crayford DA1; I was very impressed.

I was very pleased with the rubbish clearance service in Crayford. The team was professional, quick and thorough. I wouldn't hesitate to recommend Handy Rubbish.

Wanted to find some good Crayford junk removal help and these guys did a top job, now my flat looks fantastic with all the junk gone.

I hired them to do junk collection at my place in DA1 and the team worked very fast to move everything for me. Great work guys.

Probably the nicest bunch of workers I've ever encountered in this business. Great builder waste removal company. If I had to rate Handy Rubbish for the work they performed, I'd have to say they were, without question, the best in Crayford DA1.

These guys rock! Used their waste clearance service in Crayford 2 times and they were great both times. Got the cheapest offer in DA1! Would highly recommend! 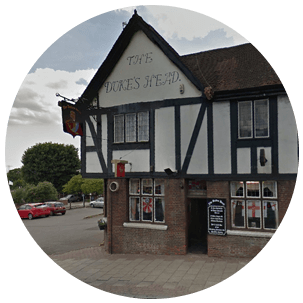 Crayford, a Historic Site and a Thriving Suburb

Crayford is an area centred around the A207 Crayford Road and Roman Way as well as the A2000 Old Road. It lies just east of Bexleyheath with Bexley to the south-west, Dartford to the east and Barnehurst to the north. It's thought Crayford has had a long and rich history with archaeological artefacts in the area dating back to 30BC. It's also the site for one of the most important battles in history which took place in AD456 or 457. Crayford has been growing slowly over the years with its population in 1831 recorded as 2022 people. For centuries it was an area associated with the printing of ties, calico cloths and silk scarves. Crayford Railway Station opened in 1886 and today has services to London Cannon St, Charing Cross and Gravesend amongst other destinations. The River Cray runs through the heart of the suburb with Cray Gardens also a focal point. Crayford is known nowadays by many for its greyhound track which hosts many important races. Some other nearby areas within easy reach of Crayford include Barnes Cray DA1, Stone, Hawley and Darenth DA2, Greenhithe DA9 and Slade Green DA8.