Nowadays hectic life and long times of commuting keep you busy enough throughout the day. With the little time that you have left in the week, don’t you want to spend it with your family or in your garage cleaning out junk and grimy tools? The answer is obvious. Everything will be much easier with our rubbish disposal Deptford, SE8 company.

You know that neglecting clearance of your home of junk and rubbish may mean that soon you will have very little available clean space to live in. The only way for you to handle the dirty work is by hiring a Deptford, SE8 waste clearance service. Our SE8 waste collection Deptford professionals will help you achieve a clean, spacious home without having to go through all the stress of doing-it-yourself.

Why You Should Choose Handy Rubbish For Your Deptford Rubbish Disposal?

We will help you to remove any kind of waste from any property you want in Deptford. We are not only limited to domestic clearance jobs but can also undertake complex office and commercial clearance jobs as well, not only in Deptford but also in the surrounding districts of SE3, SE7, SE8, SE14 and SE4. As a Deptford waste removal SE8 company, we can carry out complete estate clear-outs or specialized jobs such as garden clearance, loft clearance, furniture disposal etc.

Over the last few years, we have worked with several homes and offices in the area and all our clients have recommended us for the timely and friendly SE8 rubbish removal services we provide. We assure you that when it comes to clearing out your home, we will make it a pleasure, not a task. You can contact us on 020 3540 8282.

Choose From Our Unbelievable Amount of Waste Disposal in Deptford, SE8

Handy Rubbish has different service packages depending on whether you want help sorting and documenting your belongings, packing the waste materials, loading and transporting them or in waste disposal SE8. Our skilled and polite team is always ready to help you to put together a package that will work best for your cleaning situation. So give us a call on 020 3540 8282 and get a free quote or consultation from us for your Deptford rubbish clearance needs.

I have been using their waste removal services for several years, and they never fail to do a good job. The crew is fast, professional, and friendly, and their rates are cheaper than most of the other places in Deptford.

I couldn't believe how high my rubbish disposal bills were until I switched to this company. I quickly referred them to everyone that I know in SE8. Much better service and pricing. Thanks!

They were referred to me, and so I am passing along the good fortune. This is the absolute best waste removal company in Deptford.

I was so happy to have found these lovely blokes. I had quite a bit of rubbish that needed clearing away from my Deptford property, and all of the other rubbish removal firms were highly-priced. This company has reasonable rates and a professional, hard-working crew. I would gladly recommend their services.

Junk collection never gets better without services from Handy Rubbish. The removal guys are very friendly and easy to work with.

The garden waste clearance yesterday was spot on. Handy Rubbish crew showed up fully equipped and started the work immediately. Would highly recommend.

The Deptford rubbish removal team was very professional. They were punctual, worked quickly and efficiently. Thanks for the great service.

Whenever I have some junk removal help in Deptford I leave it to these guys, they know what they're doing!

Handy Rubbish is indeed great. They were contacted and it did not take time before they honored our invitation junk clearance in SE8. They picked everything within fifteen minutes. The company uses well-trained professionals.

Made first contact via email on their web site. They responded that very day. I liked what I read, so booked a junk removal. Overall, a fantastic service, and would be very happy to recommend them and use their services in Deptford, SE8 again.

I had to remove a huge pile of construction materials after a house renovation project so I hired a waste clearance company in Deptford. This is the most cost-effective and reliable service I have ever used in SE8! 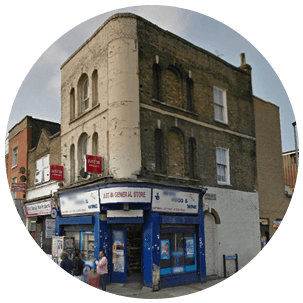 Deptford, in the London Borough of Lewisham, Greenwich, covers the postcode district of SE8. Located on the south bank of the River Thames, it is named after a ford of the River Ravensbourne. Historically, it was one of the first Royal Dockyards built and was famous for being a major shipbuilding dock. Deptford originally began from the two small communities, one at the ford and the other, a fishing village on the Thames that grew together and flourished until the metropolitan district of Deptford, formed in 1900 and included in the borough of Lewisham in 1965. With the decline of the Dockyard, the economy of the region had deteriorated in the 19th century; however later it was gradually redeveloped and gentrified with plants to renovate the riverside and the town centre. Deptford Street Market on the High Street is one of London’s best known street markets and sells a diverse range of exotic goods. The Laban Dance Centre has become a place of creative talents from Shoreditch to this area, with the Albany Theatre hosting radical community arts and music and The Bird’s Nest opening live music, film and art performances from local bands and artists. Deptford is well connected by the National Rail and Docklands Light Railway services at Deptford Bridge and Elverson Road. Apart from Deptford station, New Cross station also provides links to the rest of the city.  Surrey Quays and Canada Water tube stations are both walking distance from north Deptford.