Our clearing services across Greater London have become known as the rubbish clearance service it is so much better to hire. Handy Rubbish takes care of almost every kind of waste removal and does it legally, ethically and to a professional standard you won't find with any other commercial clearance or domestic clearance company. Our high standards are a result of many years experience and our commitment to giving the homes and businesses of Greater London better clearance services both in terms of work done and price. One of our main aims is to simplify things for you. We understand if you're faced with a situation of having to get rid of a lot of stuff and you don't know how to do it, it can be a bit daunting.

Greater London is the administrative name given for the combined boroughs of Inner and Outer London. There are thirty three of these boroughs in total with fourteen Inner London boroughs and nineteen in Outer London. Areas within Inner London include Wandsworth, Kensington and Chelsea, Tower Hamlets and Lewisham while those in Outer London are boroughs such as Hounslow, Greenwich, Bromley and Richmond Upon Thames. It's a huge area which has a population of over seven million inhabitants. The most populous area in Inner London is Lambeth with approximately 266,000 inhabitants and in Outer London it's Croydon with 333,000 people living there. Within these different boroughs you'll find smaller districts such as Camden taking in the Bloomsbury district and Wandsworth taking in Battersea whilst Ealing takes in Acton and Southall with Havering taking in Upminster. The Inner London area is generally the same area which is the London Postal District which means it ranges from postcodes such as SE1, EC1 to outlying districts such as SW20 and N22.

That's why as soon as you call us on 020 3540 8282 we can give you help and advice as well as give you a quote on how much it would cost if you hire our rubbish removal team. Getting rid of any junk can make such a difference to any location and immediately lifts your spirits when you see the end result, whether it's a house clearance, office clearance or garden waste clearance. 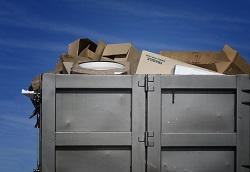 Hiring Handy Rubbish means you are hiring the house clearance professionals that can clear any amount of junk in any place whilst doing it all for a cost-effective price. Using only licensed disposal centres and making sure that as much junk will be as recycled as possible, we are the responsible way, as well as the affordable way, to take care of rubbish removal. Waste removal can also be a potentially hazardous business and it's so much better to let our professionals take care of it. Not only will you be saving yourself a much-needed physical effort, it's also hygienically better as well as overall better for the environment by hiring us. We're a local company that prides itself on the overall service it gives. We can give you a same-day service and you don't even need to be at the property which is being cleared as long as we have access to it. We really are a clearance company who tries to do everything to make your life easier. Most of all we give you a domestic clearance service which, whether it's furniture clearance or house clearance, making sure the job is done right and also to your own specifications. Calling 020 3540 8282 puts you through to the property clearance service it's so much better to hire for so many reasons.