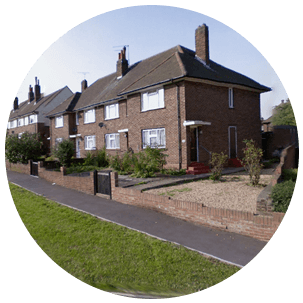 Chase Cross is to the east of Central London, part of the borough of Havering. It has the same RM5 postcode as Collier Row, which is to the west.  Romford RM1, RM7 is approximately two miles to the south with Harold Hill RM3 to the east and Havering-atte-Bower RM4 to the north. Most of the suburban area is to the south with more open land including three main parks to the north. Havering Country Park is a conservation area and is particularly popular with horse riders. Bedford's Park and Prygo Park are the other main green spaces in the area. The River Rom is just to the west of Chase Cross. There are a number of bus routes which cut through Chase Cross though the nearest tube stations at Hainult and Newbury Park which are both on the Central Line. Romford's main railway station is the nearest to Chase Cross along with Gidea Park. Havering Road (B175) is the main thoroughfare in Chase Cross. Chase Cross Road is another main route in and around the area as is Chelmsford Avenue and Gobions Avenue. The A12 lies to the south. Other nearby places include Chigwell Row IG7, Mawneys, Chadwell Heath RM6 and Noak Hill.