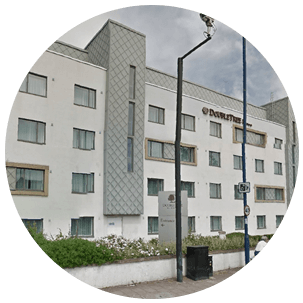 Situated just on the eastern perimeter of Heathrow Airport, Cranford is in the London Borough of Hounslow, between Hounslow and Hayes. Mentioned in the Doomsday Book, 'Cranforde' means the ford frequented by Cranes or Herons. To the north is the M4 motorway and to the south is the A30, the Great South-West Road.  The River Crane flows between Cranford and Heathrow Airport. Also to the north of Cranford's centre is Avenue Park and Cranford Park. Cranford Park was originally the grounds for Cranford House which was demolished in 1945. Today, this 144 acre open space still has many historical remnants including the restored St Dunstan's Church. There are also some 17th and 18th century buildings to be seen along the High Street which, along with The Avenue, Church Road and Cranford Lane, is one of the main thoroughfares in the suburb. The nearest tube stations to Cranford are to the south of the community with Hatton Cross and Hounslow West both on the Picadilly Line. Areas within easy reach of Cranford include Harlington, Heston, Hayes, Hatton and Hounslow West. Cranford is covered by the TW4 and TW5 postcodes with other postcodes nearby including TW14, TW13, TW6 and TW3.