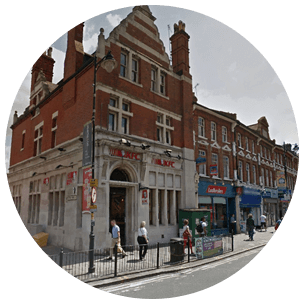 Lying in the Borough of Haringey, Crouch End covers the postcode district of N8 and is wonderful, picturesque valley that lies between Harringay in the east, Muswell Hill, Wood Green and Hornsey in the north, Archway and Finsbury Park in the south and Highgate in the west. Abound in greenery, there are several woods (Highgate Wood and Queen’s Wood) and parks (Alexandra Park, Finsbry Park, Priory Park, Crouch Hill Park) in the vicinity.  The area is well connected by buses and railway services. The nearest Underground railway stations are Finsbury Park, Highgate,Turnpike Lane, and Archway whereas the Overground serves Hornsey, Harringay, Crouch Hill and Finsbury Park. A number of bus routes, including night buses N91 and N41, operate in this area. Crouch is also surrounded by area being home to a number of recording studios and music festivals. The Crouch End Festival, held in end-May to early-June, features a number of art exhibitions, drama, dance, film, poetry, photography and musicevents. The council is also encouraging ventures by running local campaigns in schools and creating the Mountview Academy of Theatre Arts in what was formerly known as Hornsey Town Hall. Crouch End has been graced by prestigious legends such as Bob Dylan and Stephen King and  a number of literary and cinematic works.