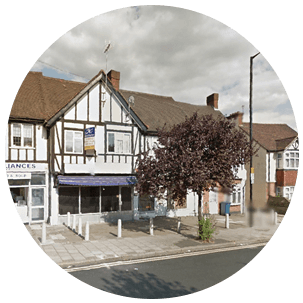 Harrow Weald, based in the London Borough of Harrow, comes under the postcode of HA3. It is a suburban area of Harrow on the Hill and the surrounding areas are Bushey Heath, Hatch End, Stanmore and Headstone. It holds the main campus of Harrow College and Harrow Weald Cemetery. It has a build-up area of shops, Harrow Central Mosque, large supermarkets and pubs. The nearest station is Harrow Weald Tube Station, as well as Kenton, that is served by the Bakerloo line. Harrow Weald is served by various bus routes that go towards Heathrow Airport, Brent Cross, South Harrow, Edgware, Stanmore and Harrow on the Hill. Harrow Weald derives its name from Weald meaning Woodland and was built  in 1382. Ancient woodland fills up most of the area, which shares a neighbouring border with Hertfordshire, and it holds some of the highest points in Greater London. The western part of the weald makes up for Harrow Common Woodland, as well as the Eastern part that comprises of Stanmore and Bentley Priory.