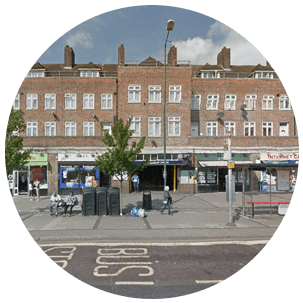 Queensbury can be found in North West London, and is in the London Borough of Harrow, on the border with the Borough of Brent. The area is split by postcode districts, the area around Queensbury tube station is in the HA postcode district, whereas the rest of Queensbury is in the NW postcode area. Places near Queensbury include Burnt Oak, Edgware, The Hyde and Stanmore. Surrounding postcode areas include HA8, W2, NW9 and HA7. Queensbury really came into existence because of the tube line, and so because of this, much of the housing, shops surround the tube. The station was even sited in a song by Paul Bonin and Melanie Hickford, both of who lived in Queensbury, when they were young. Facilities in the area include a post office and shops, but the area is mainly housing. People can easily travel in and out of the city to Queensbury, making it a popular area for commuters to live in.