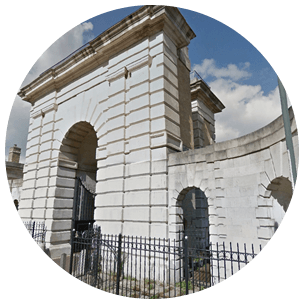 Woolwich is an area in the south east of the Greater London area. It is part of the Royal Borough of Greenwich, in the SE18 post code area. The area is near historical Greenwich, and has a similar maritime naval history. The area still has military connections, with various regiments housed in barracks in the area. The area is accessed via Woolwich Arsenal station for railway connections to Charing Cross and Lewisham in either direction. The station also serves the Docklands Light Railway, which connects it to many areas around East and Southeast London, as well as to Bank station, on the Northern, Central, Circle & District and Hammersmith & City lines. The area is enjoying redevelopment as a residential area, and its closeness to Blackheath and Greenwich means that it is a potential place for commuter buying. The area’s lack of connections makes it a less obvious candidate than some of the areas that have been joined by the overground system, however.