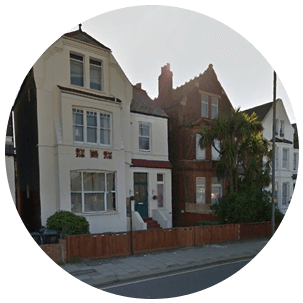 It is a district in South East London, midway between Charring Cross and the edge of Greater London. It is within the London Borough of Bromley and uses SE20 postcode. Nearby postcode areas include SE19, SE25, SE26 and BR3. Nearby locations include Crystal Palace, Penge, Beckenham, Upper Norwood, South Norwood, Selhurst, Thornton Heath, Sydenham, Elmersend, Eden Park and Park Langley. It has always existed more as a general area than a fixed location as it has often been part of other places. The Crystal Place stood near the area and there was a train station here to access the exhibition. In 1827, Scottish merchant William Sanderson bought the land and would build here. The Croydon Canal passed through here in its short tenure. The area had a troubled history concerning the railway, as accidents and closures prevented it from flourishing. Notable people who have lived in the area include Walter de la Mare, James Busby, Arthur Bigsworth, Thomas Crapper and Francis Godolphin Osbourne Stuart.