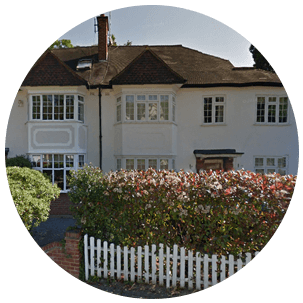 Chislehurst, a Suburb with a Village Atmosphere

Chislehurst in the borough of Bromley is a suburb in south-east London. Lying south-west of Sidcup, it borders the boroughs of Bexley and Greenwich. The name Chislehurst is said to come from the Saxon words Cisel 'gravel' and Hyrst' wooded hill'. Chislehurst West was also once known as Pricking. There are a number of green spaces in Chislehurst and it's regarded as a highly desirable place to live. It has an old village centre as well as a common and some 19th century cottages. Chislehurst Common is at the centre of the area with the main roads A208, B263 and the A222 forming its borders. The A20 Sidcup By-Pass Road is to the north. Other green spaces include Petts Wood,  Hawkwood and Scadbury. Chislehurst railway station has train services to London Cannon Street, Sevenoaks, Orpington and London Charing Cross. Places within easy reach of Chislehurst include Petts Wood, Mottingham, St Pauls Cray and Bickley. A major local tourist attraction is Chislehurst Caves. This series of tunnels is 22 miles long and entirely man-made, once being used as chalk and flint mines. Chislehurst has the postcode BR7 with adjoining postcodes being BR5 St Mary Cray, BR6 Chelsfield, and BR2 Hayes.