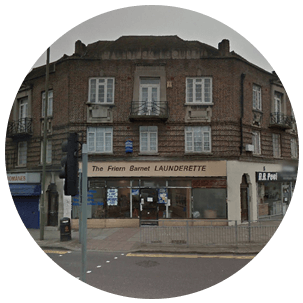 Colney Hatch is an area situated just to the north of the A406, North Circular Road. The B550 Friarn Barnet Lane also cuts through the centre of the area with other main local thoroughfares being the A1003 Woodhouse Road/Friern Barnet Road and Summers Lane. In 1831 it was recorded that Colney Hatch had just 33 inhabited houses but with the building of Colney Hatch Asylum in 1851, accommodating at one time 3000 patients, the surrounding Colney Hatch area became more populous. It also meant that Colney Hatch railway station was opened. Now called New Southgate station, it has trains to Moorgate, Kings Cross and Welwyn Garden City. The asylum itself became known as Friern Hospital and then eventually closed in 1993. This was then the site of some major new housing in the area including parts of the actual hospital being converted into apartments. A major green space in the area is Coppetts Wood and Scrublands, part of Glebelands Local Nature Reserve and covering 14.5 hectares.  Surrounding areas include Fortis Green, Alexandra Palace, North Finchley, Muswell Hill and Bounds Green. Colney Hatch is covered by two postcodes, N10 and N11 with other local postcodes including N22, N8, N6, N2 and N12.