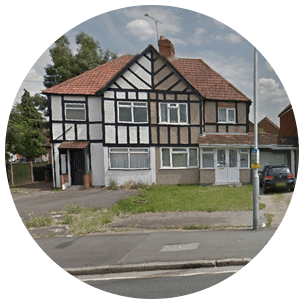 Harmondsworth is a village close to Heathrow Airport, in the greater London Borough of Hillingdon. It is close to other small settlements like Harlington, Hayes, Longford, West Drayton, Sipson, and Yiewsley. The area is in the UB Uxbridge post code district, and is about as far west as the London ground map will go. The village has a notable historical aspect, and houses dating back from the 14th or 15 century, which were made entirely without nails. Because of this cultural significance, the Harmansworth Barn is now protected by English Heritage. The area is served by West Drayton railway station, which provides links to London Paddington, via the Great Western railway line, a popular and historical line between the Thames Valley and Paddington, built by the famous engineer Kingdom Brunel. The area is home to British Airways, due to its proximity to Heathrow airport, its headquarters housed in Waterside. Less glamorous, there are also two UK border agency immigration removal centers in the area, dealing with overspill from the airport itself. The area has been developed for industrial office use, but not extensively in terms of residential building.