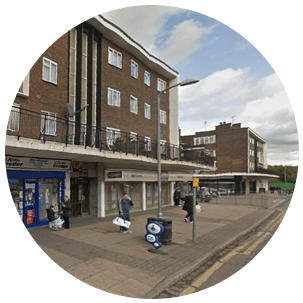 A Piece of the Past Near Romford

Harold Hill is in north east greater London, and is in the London Borough of Havering. As its post town is Romford, the post code that it goes under is RM3. The area is popular extensively with post war housing in a similar red brick style. This post war building took place on the Dagnams estate, in order to alleviate the shortages of housing in inner London after the war. This was a development of note because the estate was part of the metropolitan green belt, which is designated as a green space only, designed to prevent the spread of London buildings. The redevelopment of the estate into council housing was allowed due to the  extreme shortages in housing after the bombings of the war. Since 1967, there has been a trend of housing development , that continues to this day, as a form of upward social mobility. The nearest railway station is Harold Wood, and the nearest tube station is Upminster, though that is three miles away.