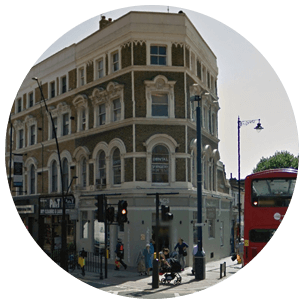 The very busy district known as Kilburn is located in North West London and is much spread to cover the Boroughs of Camden, Brent and a relatively little area of Westminster. This popular ancient district has the post area code of NW6 and it shares borders with Cricklewood, Brondesbury, Kensal Rise, Queen's Park, West Hampstead and Maida Vale. The area is perfectly served by the services of both - the London underground and busses, making Kilburn an easy place to get around. The district of Kilburn was an Irish populated area, but these days it has become multicultural. Entertainment typically varies between North and South Kilburn, with the North being well-known for the drinkers who gather in its abundance of pubs and clubs. South Kilburn can be described as a shopaholic’s paradise due to its vast variety of shops and boutiques. England’s longest road the A5 runs through Kilburn and Belsize Park, known for being the home to many celebrities. Grange Park is a popular place for children and for those to enjoy the tennis and netball courts. The Kilburn Festival is held every year in July and is a very popular event.