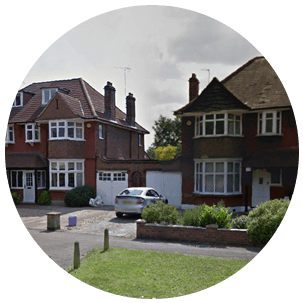 Situated between Wimbolden and New Malden and in the London Borough of Merton in South West London, Raynes Park is a residential area in the district. It is in the postcode area SW20 and surrounding areas include Cherry Wood, Mitcham, Sutton and Carshalton. Nearby postcodes include SM4, CR4, SM3 and SM5. Raynes Park is on the boundary with the Royal Borough of Kingston Upon Thames and so housing in this part of the area is large, detached and upmarket and often gated. Given that Raynes Park is only 8 miles from Central London, it has an extremely high amount of open green space - the largest proportion in South West London. This is made up mainly of parks, including Cannon Hill Common which is 21 hectares of open space in itself. The area is easily accessible by both bus and train, with both of these having stops within Raynes Park. The area has its own football team, although they are non-league, and has plenty of noticeable residents including Dave Benson-Phillips, a children's television presenter, Richard Brier, an actor and Chris Powell, a footballer.