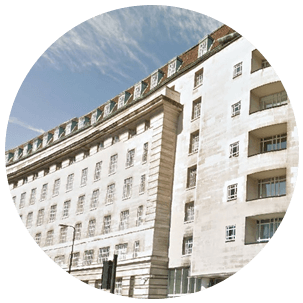 It is a part of the Borough of Lambeth. It is just east of Charring Cross and borders the River Thames. Its postcode area is SE1, with nearby SE5, SE11, SE15, SE16, SE17, WC2N, WC2R, EC3N, EC3R, EC4R, EC4V, EC4Y, SW1A and SW1V, though some of these are across water. These postcode areas contain Camberwell, Peckham, Kennington, Nunhead, Rotherhithe, Bermondsey, Walworth, Charring Cross, Somerset House, Tower Hill, Billingsgate, Cannon Street, Blackfriars, Temple, Whitehall, Chelsea Bridge. For most of its existence, the area was uninhabited marshland but in the 18th century, it was drained and a town was erected. The Waterloo Bridge was construed in 1817 to celebrate the defeat of Napoleon and was later rebuilt in 1945. St. John, the Evangelist church in Waterloo Road has stood since 1822 to give the growing population a place of worship. The area became connected with the rest of London when the railway was completed here in 1848.The Cut is currently the heart of Waterloo and home to many restaurants. The Old Vic and Young Vic theatres host a wide range of performances.