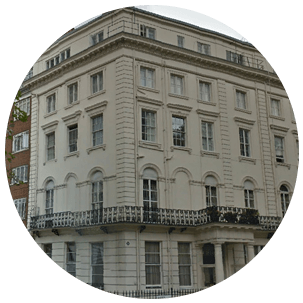 Bayswater is a small district in northwest London which covers the W2 postcode district. Just 3 miles away from the central hub of Charing Cross, it has an enviable spot in the City of Westminster and is in zone 1 of London’s transport districts. Close to the affluent areas of Hyde Park, Kensington Gardens, Paddington and Notting Hill Gate, it is a desirable place to live with a cosmopolitan community. House prices here tend to be far above the London average and include a mixture of luxury apartments, studio flats, apartment blocks and Victorian terraces. Due to its central location, the area is built-up and has the largest number of hotels in any London district. Despite this, the area also has a number of pretty streets and squares which have attractive Victorian buildings. The population of the area is known for being very diverse and has a large number of professional city workers along with strong Greek, Brazilian and American communities. As a result, there are a large number of international restaurants to be found on the main streets in and around Queensway and Westbourne Grove. The area is served by its own tube stop on the District and Circle Lines and is just one stop away from Paddington.