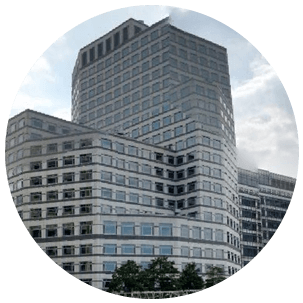 Canary Wharf is an area in the London Borough of Tower Hamlets that is southwest of London’s central Charing Cross district. Classed as one of the city’s major business districts, it is a bustling financial centre that is in London’s Docklands area. Home to three of London’s tallest buildings, over 100,000 people are thought to work in the district. As a result, there has been an increased number of residential properties in the area, including a number of luxury flats for professional workers. As well as its strong business links, the area also has its own shopping centre and is connected to the centre via its own tube stop on the Jubilee Line. The Docklands Light Railway also runs through here and provides links to West India Quay, Herons Quay and Poplar. The areas of Canada Water, Bermondsey, and North Greenwich can also be found nearby and are home to some popular sights including the O2 arena. Located in zone 2 of London’s transport districts, Canary Wharf covers the E14 and E1 postcode areas and is a busy hub which is not that far from the central districts.