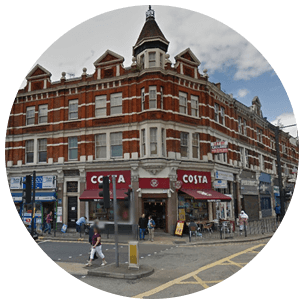 Cricklewood is an area of north London that stretches out on either side of Cricklewood Broadway and Cricklewood Lane. In between the London boroughs of Brent, Camden and Barnet, it has many leisure, education and business facilities. The area was once just a small settlement around Watling Street (now Edgware Road) before the railway and underground railway arrived in the 1870's. Today, it has mostly Edwardian, late-Victorian and 1930's architecture with some other impressive buildings such as the one presently housing the Crown Moran Hotel, once the Crown pub. Cricklewood has excellent transport links with Cricklewood mainline train station linked to St Pancras International, Farringdon Station and Luton Airport. Willesden Green tube station on Walm Lane is on the Jubilee Line as is Kilburn Station also about 15 minutes away from Cricklewood Broadway. Cricklewood Broadway is part of Edgware Road and runs down to Marble Arch between Hyde Park and Oxford Street. A notable and popular green space is Gladstone Park, which, in addition, has sport facilities, an art gallery, cafe and pond. Areas around Cricklewood include Brondesbury, West Hampstead, Kilburn, Dollis Hill, Willesden Green and Childs Hill. Cricklewood is covered by the postcode area NW2 with other nearby postcodes including NW6, NW10, NW9 and NW4.