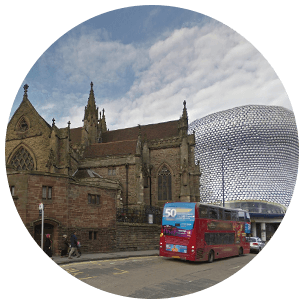 Located in Central Birmingham, Digbeth is a district within the Birmingham City Centre. It is currently undergoing major redevelopment and is transformed from an area with a primarily industrial character to a residential suburb with retail shops, offices and art premises. The place is home to the Birmingham Coach Station, operated by Britain’s largest express coach network - National Express. The Old Crown, which is the oldest extant secular building in Birmingham, and the HMV Institute are also situated there. Other popular landmarks include the Ikon Eastside and the Custard Factory, which functions as a creative and business workspace location.