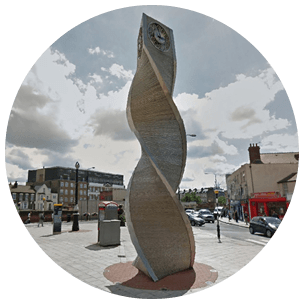 Leytonstone is a region of East London and a division of Waltham Forest. Leytonstone is surrounded by the areas of Wanstead to the North, Walthamstow to the North West, Leyton to the South and Forest Gate to the East. Its postcode areas are E11 and E15. The main road through is High Road which runs from Leytonstone to Stratford, and was once an ancient old roman pathway. The area has many remnants of life in the Roman times including a restored 18th century obelisk at the junction of the roads Woodford and Woodford Bridge. This road was important for journeys in the 14th century, but by the 1960’s became busy and soon congested around the shopping area. The area is a bustling town with plenty of amenities and entertainment. The M11 was constructed to reduce the congestion, but the area is still very busy. The area has food connections to other areas of London with Leytonstone tube station and Leytonstone railway station.The area is mainly a residential area with a wide choice in housing. It is situated 7 miles north east from Charing Cross in Greater London. Alfred Hitchcock was born in Leytonstone in 1899.