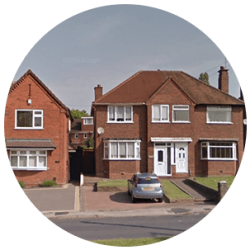 Take a Trip Down Memory Lane

The humble woodpigeon is believed to have given Queslett its unusual sounding name which was originally registered as Quieslade. The former hamlet was situated within the parish of Handsworth and came under the manor of Perry in the 1800s. An intriguing set of moonstones were carved and set in the 1990s to commemorate eight members of the former Lunar Society. Each stone shows a different phase of the moon’s cycle. Today the area is part of Great Barr with private residences first springing up in the 1930s. The area now forms good links to Sutton Coldfield and West Bromwich.