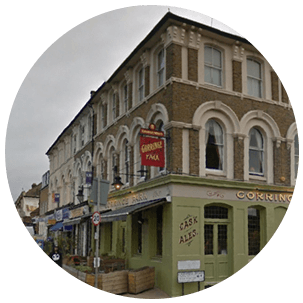 The area is within the Borough of Wandsworth in South West London. It utilises the SW17 postcode area and shares its borders with SW12, SW16, SW18, SW19 and CR4, meaning Belham, Clapham South, Streatham, Thornton Heath, Wandsworth, Wimbledon Colliers Wood, Mitcham are close by. It is one of the major areas identified as part of the London Plan. A Roman road suggests an early settlement here, as the area was mentioned in the Domesday Book. Construction in the Victorian era transformed the area into what it is today. The UK’s largest swimming bath, Tooting Bec Lido, was built in 1906. 1956 saw the opening of St. George’s Hospital, which is the UK’s major medical teaching centre. Tooting Common is a foremost spot in the area, as it’s the largest open space here, and home to various wildlife including rare animals. Restaurants are common here and Wimbledon Greyhound-Racing track is one of the area’s notable landmarks. A football team represents the area: Tooting & Mitcham F.C. In 2005, a crater on Mars was named after the area.