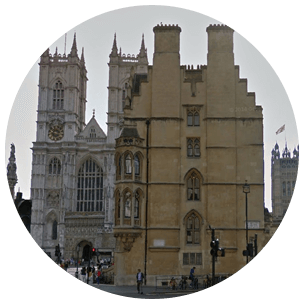 The area is within Central London and is part of the City of Westminster. The River Thames runs through the south of the area and it is south-east of Charring Cross. It covers the SW1 postcode district, which contains numerous subsidiaries, labelled SW1A, SW1E, SW1H, SW1P, SW1V, SW1W, SW1X and SW1Y. This covers places such as Whitehall, Buckingham Palace, Victoria Station, St. James’s, the Houses of Parliament and more. Nearby postal areas include SW6, SW8, SW11, SE1, WC2N, WC2H and W1. They feature locations such as Fulham, Battersea, South Lambeth, Bankside, Lambeth Bermondsey, Charring Cross, Leicester Square, Regent Street, Oxford Street, Chinatown, Soho, Marylebone, Mayfair, Piccadilly. The area is named after Westminster Abbey. It was long a home of the Royals and it is where new Kings and Queens were crowned. Later it became more involved with parliament and is now where the Houses of Parliament stand. Many other notable places exist here such as the House of Commons and House of Lords, Westminster Abbey, Westminster Cathedral, Buckingham Palace and the Palace of Westminster. People come from all over the world to visit these sites.