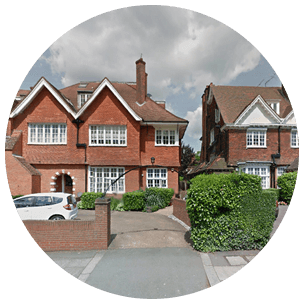 Found on the northern side of Regents Park, Primrose Hill was originally the name of a 78 metre tall hill. Since then it has given its name to the surrounding area and gives extremely good views of the city of London from the top of the hill. The district of Primrose Hill can be found in the London Borough of Camden and in the postcode areas NW1, NW3 and NW8. Areas around Primrose Hill include Lower Belsize Park, Saint Pancras, Hampstead Heath and Barnsbury. Nearby postcode districts include NW3, NW5, N1C and NW6. Not only does the hill itself make Primrose Hill an appealing district, but the area is also one of the most expensive areas to live in in London and has plenty of famous residents who enjoy its exclusivity. Because of this, Primrose Hill has seven blue plagues to commemorate famous people who have lived there. These include the poet Sir Arthur Hugh Clough, painter William Roberts and poet and novelist Sylvia Plath, alongside many others. Primrose Hill was once crown property and owned by Henry VIII, so it is easy to see why this exclusive lifestyle continues in the area even today.