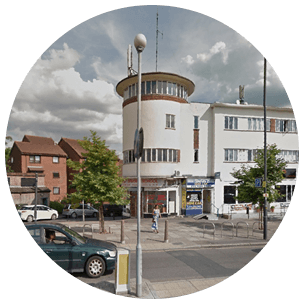 Rayners Lane is a mainly residential suburban area in North West London. It is found in the London Borough of Harrow and is in the postcode district HA2 and HA5. Areas surrounding Rayners Lane include South Harrow, Pinner, North Harrow, and Eastcote. Nearby postcode districts include HA4, HA0, HA9 and UB8. Like many towns and suburbs in London, Rayners Lane grew because of a tube station, and so because of this, most of the area centres on this. This has brought many businesses into the area such as supermarkets and fast food outlets, to provide goods for the influx of people getting the tube. Although the area is mainly known for its tube station, which is art deco in style, the area has Rayners Lane FC, its own football club. This is surprising as the suburb is small, compared to other similar areas. One of the main known people from Rayners Lane is Commodore Harry Grattidge, who was one of the last captains to RMS Queen Elizabeth.