London is a vast metropolis that consists of four key districts, North London, South London, East London, and West London. Each of these districts contains many boroughs and regions. It all adds up to London, being a place that can offer anything and everything to anyone and everyone. If you were to focus on West London, you will quickly find that its nucleus is Shepherd’s Bush. Shepherd’s Bush definitely has a lot to offer. If you have chosen to make that area your home, you will have to clear away any unwanted items from the property, before you move in. When you need a name in the clearance world that you can count on, pick up the phone and give our W12 waste removal team a call.

The easiest way to do this is to hire professional Shepherd’s Bush waste clearance services, of which Handy Rubbish offer the best of. This is because our team understands what commercial clearance entails, unlike any of our competition. If you are sick and tired settling for the subpar, when it comes to rubbish removal Shepherds Bush, pick up the phone and call 020 3540 8282. From there we can take the job out of your hands and make your clearing experience stress-free. We can also offer you garage clearance, attic clearance and garden rubbish disposal services in W12.

Should Shepherd’s Bush be your home, or you plan on making it such, then you will definitely need rubbish clearance services in Shepherds Bush, W12. Flats may be able to present you with stunning views, but rubbish will always be a tricky matter. If you are one of many who are trying clear out a flat, then you will understand the trouble and stress, it can cause. Change the way you do things and sidestep such problems by hiring a professional W12 waste disposal service. Here at Handy Rubbish we offer high-standard services at affordable prices.

List of services we provide in Shepherds Bush, W12

The Ins and Outs of Shepherd’s Bush Waste Clearance Services

It doesn’t matter whether you are living in the W12 or W11 postcode we can help. We will access your flat and dispose of its contents, quickly, efficiently and safely. To find out more information on what exactly we do, pick up the phone and call our Shepherds Bush waste collection W12 team on 020 3540 8282. Not only will they give you additional details in a no nonsense fashion, but they will also provide you with a free no obligation quote for your trouble.

The process of getting garden waste removal sorted in Shepherds Bush was quick and easy with this company. They were able to come around the very next day, which was ideal.

I arranged for some rather large, heavy, and awkward to carry items of furniture to be carted away. The rubbish clearance team arrived in Shepherds Bush W12 on time and were professionals, could follow instructions. They did just what I asked of them.

I have hired the rubbish disposal services of Handy Rubbish numerous times, and they always do a great job. The crew is professional but also polite, and they get the job done quickly. I would recommend them to anyone in the Shepherds Bush area in need of waste removal services.

I heartily recommend this waste removal company in W12. They are reliable and relatively inexpensive.

I was desperate for quality rubbish removal services in Shepherds Bush W12. I was not willing to compromise the quality, so I took my time. After inquiring most of the people, I asked recommended Handy Rubbish. Worth every penny!

I had been looking for quality rubbish removal services around W12. I had to consult several of my neighbours. Most of them recommended Handy Rubbish to me. I was brave enough to try them out and true to their word; they did not disappoint.

We moved into a fixer-upper in the W12 area. Needless to say, we needed a rubbish disposal service. Handy Rubbish came out straight away and they do wonderful work. They are also super affordable.

Really pleased with the price offered by Handy Rubbish for waste clearance in Shepherds Bush. Thanks a lot for the great service!

Helping my aunt to clear out her home in W12 we were in need of a waste disposal company. Many companies had refused the job as they described it as 'too large' and suggested using a skip. Having already used a skip and being overcharged astronomically, I found this waste disposal service online. The gentleman I spoke to over the telephone was courteous and asked me to describe how much rubbish there was to remove. They arrived the next morning! Extremely experienced and chipper!

I got a top class rubbish disposal service in Shepherds Bush at an affordable rate. Their team in W12 were really considerate and efficient! Will definitely use this service again! 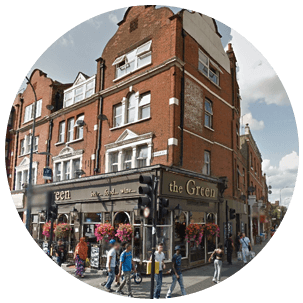 A Popular Place To Live In

When talking about areas of London, few can argue that Shepherd’s Bush doesn’t rank within such categories. The West London area is arguably the most key feature within the Borough of Hammersmith and Fulham. Even though it is primarily a residential region, it is also home to the largest urban shopping centre in Europe. Westfield Shopping Centre features everything from high fashion to a fully functioning IMAX cinema; there is no doubt that Westfield is a unique shopping experience. Outside of mainstream shopping, the area also features countless independent shops, it also is home to Loftus Road and Queens Park Rangers Football Club. The area is bordered by Hammersmith, Brook Green, Acton, Chiswick, meaning that further amenities aren’t too far from reach either, including London’s famous Hyde Park. Residentially speaking, Shepherd’s Bush offers properties both large and small, many of such properties are located either within the White City estate or around Shepherd’s Bush Green. If you are on the move or looking for somewhere new, and want somewhere that ticks all the boxes in the process, then Shepherd’s Bush is definitely an area worth looking at.