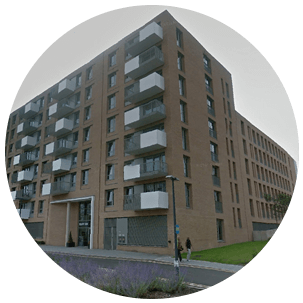 Silvertown is situated in the London Borough of Newham, on the north bank of the Thames. It is under the postal code of E16. The area was named after the rubber factory which opened in 1852. It has been somewhat transformed in recent times and has several areas of interest, including the Thames Barrier, the London City Airport and an abundance of new housing areas. The Silvertown Ambulance Station was opened in 2007 by Prince Richard, Duke of Gloucester. Other areas of interest are the redevelopment of the Silvertown Quay, which is situated south of the Royal Victoria Dock. Silvertown is also home to the sugar refinery, Tate & Lyle which was a merger between two rivals in the area. One of the most historic events of Silvertown occurred in 1917, when a TNT explosion happened at Brunner-Mond munitions factory. Sadly, there were over 70 casualties in the explosion. Silvertown has had plenty of recognition in the media. It features in a ballad, aptly entitled, ‘Silvertown Blues’ and the British TV series, Upstairs, Downstairs.