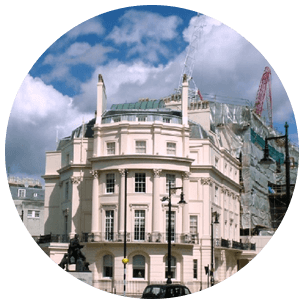 The Fashionable District Of Belgravia

Located in the City of Westminster and the Royal Borough of Kensington and Chelsea, the SW1X and SW1W areas of Belgravia are some of the most fashionable places to live in London. Firmly situated in zone 1 of London’s transport districts, Belgravia has excellent transport links and is considered to be one of the wealthiest places to live in the world. Just southwest of Buckingham Palace, it is surrounded by some of the most well-known London streets including Sloane Square, Grosvenor Place, Pimlico Road and Buckingham Palace Road. The nearest tube stations can be found at Hyde Park Corner, Knightsbridge and Sloane Square and are on the Piccadilly, Circle and District Lines. Residential areas here tend to be characterised by stunning white stucco houses which have a wealth of elegant balconies and stately features. In addition to its grand garden squares, the area also has an exclusive selection of boutique shops, restaurants and hotels and a number of foreign embassies. With their high price tag, many of the houses are thought to have been bought by international business owners that often means they are luxury second homes close to the central business districts.