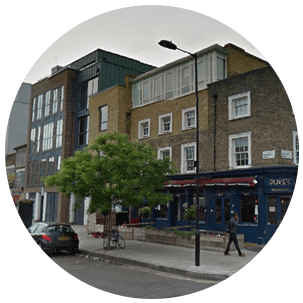 De Beauvoir Town that covers the postcode district of N1 falls in the London Borough of Hackney and partly in Islington. Regent Canal runs south of the region and is the reason that stimulated the upper class residences building in what was formerly mostly open country with a few manor houses. The area south of Downham Road has recently been rezoned for industrial use, thus gives the region a modish and affordable look. The quiet, tree-lined streets of De Beauvoir Town have a number of semi-detached Victorian houses. The houses around the De Beauvoir Square are very distinctive in structure with their Dutch gables and mullion windows. Although it was initially built as a middle class, residential enclave, the neighbourhood recently has become more socially and culturally diversified. De Beauvoir affords peace and privacy to its residents along with the privileges of city living. The nearest railway stations are at Essex Road, Canonbury, Dalston and Haggerston. The Underground services Angel, Old Street, Highbury and Islington tube stations nearby although a number of buses also operate in the area. The Regent Canal towpath is easily accessible and very popular among pedestrians and cyclists. The town has a wonderful new energy vibe that have been brought by the young families.